It is surprising how life loops around returning to similar, perhaps familiar would be a more appropriate word, ideas. My first foray into developing curriculum using technology started in 1968 at a company called Ealing in their Film Loop division as their physical science and math editor. I was to teach single concepts, as we called them, to students on silent films. The technology, a clever relatively cheap system developed by Technicolor, was designed to make film so easy to use that students and teachers could use it by themselves. In Jr. and high school I was one of those techies who set up and ran movies for teachers carting in and threading those hefty 16 mm projectors. I immediately saw the advantages of this new simplified technology. 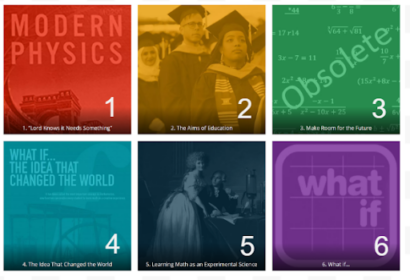 I was also well aware of its drawbacks — silent, small image (super 8mm), just 3 ½ minutes in length, fragile, and relatively expensive media. These constraints made the task of developing single concept films, where images had to tell the story and words acted as captions, a great learning experience. I had to present ideas visually and not verbally, a new and demanding task for a former teacher used to standing and delivering to high school physics students. This was an even greater challenge in that era when textbooks, whose name well describes their form, were sparsely and poorly illustrated.

I had no choice. Text on film either as silent movie “cards” or captions over images wasted valuable film. I had to learn a new discipline, to picture a concept or tell a story with pictures and not words. I have always considered the opportunity to master this skill one of the great good fortunes of my life. You will, I hope, see in these Labs powerful visualizations of single concepts that your students can build their problem-solving abilities upon. And despite the lifting of those film technology constraints, the need for visualization and limited verbalization remain keys to student conceptualization and attention.